Truth From The Dead

The Watchtower Society has a history of claiming the involvement of dead members in the furthering and understanding of truth.

From The Finished Mystery on page 144:

“Though Pastor Russell has passed beyond the veil, he is still managing every feature of the Harvest work. `THE WATCH TOWER BIBLE AND TRACT SOCIETY is the greatest corporation in the world, because from the time of its organization until now the Lord has used it as His channel though which to make known the Glad Tidings'"


The Watchtower from November 1, 1917, states this under page 6161 from the reprints by the Watchtower Society:

“Hence our dear Pastor, now in glory, is without doubt, manifesting a keen interest in the harvest work, and is permitted by the Lord to exercise some strong influence thereupon.”


Is this just an incorrect understanding which was refined and corrected with time? No.

Over 70 years later, similar claims are still made. Yes, even current “light” from the Watchtower Society includes how the dead is involved with the receiving of truth.

“It is fitting, then, that one of the 24 elders representing anointed ones already in heaven, should stir John's thinking...(Revelation 7:13, 14a) Yes, that elder could locate the answer and give it to John. This suggests that resurrected ones of the 24-elders group may be involved in the communicating of divine truths today.”


This means throughout the organization’s history, as well as remaining the current teaching, the Watchtower Society believes and teaches that dead anointed members (those of which according to Watchtower Society doctrine are of a literal 144,000 individuals) have involvement in communicating divine truths to living Jehovah’s Witnesses.

Not only does the Watchtower Society lack any moral authority to condemn any organization or person for practicing Spiritism, they are hypocrites and liars to claim they do not engage in such practices.
Posted by trebor at Thursday, February 26, 2009

"From its inception, [the United Nations] has also had the great harlot [false religion] riding on its back, visibly associated with it...representatives of the Roman Catholic Church and the Eastern Orthodox Church, together with Protestants, Jews, Hindus, Buddhists, and Muslims—said to represent two thousand million of earth's population—assembled in San Francisco to celebrate their support and admiration of the UN."

This is obvious and blatant hypocrisy.

The following Jehovah's Witnesses served as the representatives of the Watchtower Society respecting applying for NGO association on behalf of the organization: 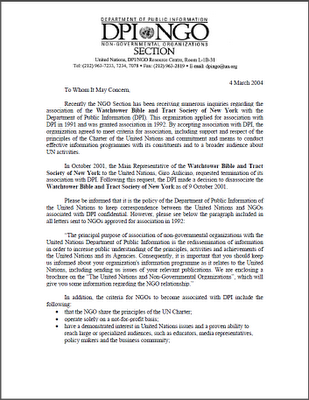 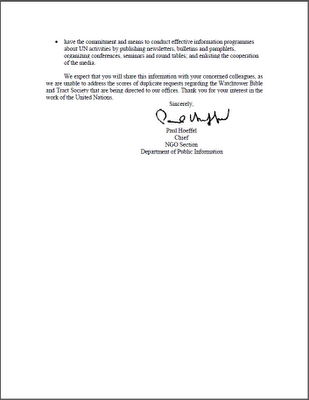 While the Watchtower Society was an active associate of the United Nations, knowledge of the facts spread, including an article written which publicly exposed the hypocrisy and deceit. On October 8, 2001, The Guardian published an article entitled "Jehovah's Witnesses link to UN queried - Sect accused of hypocrisy over association with organisation it has demonised." It was written by Stephen Bates, a religious affairs correspondent. The Watchtower Society went on the defense. Later in the same month, they issued a letter to all branch offices claiming that their NGO association was a result of needing a “library card” and since then the "criteria for association" with the UN changed. After which the Watchtower Society requested to have their relationship with the United Nations terminated.

The truth is the criteria in 1991, when they started to 'ride the wild beast', entailed just as strong devotion and commitment as it did in 2001. Every year they were required to renew their association. Furthermore, their letter to the branch offices was misleading in trying to make Jehovah's Witnesses believe that only recent association changes aligned them in such a way to make them part of the harlot in which they "immediately withdrew registration". The reality is their change in stance came about due to the overwhelming pressure and too many people questioning and calling them out on their deceit, trickery, and hypocrisy.

The "library card" defense is pathetic at best. Prior to the aftermath of September 11, 2001, one could have used the library without being an NGO active associate. Nonetheless, is that excuse or any excuse valid for being a part of the harlot riding the wild beast?

The following are five of the requirements set by the United Nations for non-governmental organizations along with some of the Watchtower Society's compliance articles towards their commitment and support of the listed requirements:

The Watchtower Society's support and cooperation in promoting and being a part of the United Nations, 'riding the wild beast' was so clear and resounding that the United Nations Office of the High Commissioner for Human Rights highlighted one such article on its website found here:

It is disgraceful and despicable. The Watchtower Society is teaching Jehovah's Witnesses one thing and practices another regarding political association and ties. It has clearly supported and promoted what they deem as the scarlet colored wild beast of Revelation, through their own publication which is supposed to be "providing food at the proper time" to Jehovah's Witnesses.

By their own actions and teachings the Watchtower Society is part of the harlot, the prostitute which rides the wild beast. They are a part of false religion by their own standard and measurement. Continue to research and understand the truth about the organization behind and directing Jehovah's Witnesses.
Posted by trebor at Wednesday, February 11, 2009