"Do not put YOUR trust in nobles, Nor in the son of earthling man, to whom no salvation belongs."

"Since Jehovah God and Jesus Christ completely trust the faithful and discreet slave, should we not do the same? After all, the slave has shown itself to be faithful in doing its assigned work."


Do Jehovah God and Jesus Christ "completely trust", "the sons of earthling man", or is the Watchtower Society both lying and providing directives that go against the scriptures?

Additionally, the Bible provides the following instructions in 1 Corinthians 4:6:

"Now, brothers, these things I have transferred so as to apply to myself and Apol′los for YOUR good, that in our case YOU may learn the [rule]: “Do not go beyond the things that are written,” in order that YOU may not be puffed up individually in favor of the one against the other."


What application are Jehovah's Witnesses provided in harmony with the above verse? The April 15, 2008, Watchtower on page 7 states the following:


Essentially, the instruction from the organization are for Elders to not go beyond what is written in the Bible, but the faithful and discreet slave can and does go beyond what is written. Elders should follow what the Bible states and through the Watchtower's interpretation of a so-called "extension" follow what their faithful and discreet slave direct.

Again, the Bible is clear in its statement, but the Watchtower Society brandishes its unique spin on the matter which is in fact going contrary to the Bible; indeed, going "beyond the things that are written".

The motivation and reasoning for both points is obvious. The Watchtower Society wants Jehovah Witnesses to feel, think, and believe that they are the ones with a so-called 'truth' which needs to be followed. This is despite their indoctrination going against what the Bible plainly provides should be avoided and not performed.  It includes following and applying everything in their publications, especially the Watchtower magazine.

A primary way the organization wields its power and control over its members effectively is by having the person's trust and the ability for them to obey and carry-out whatever instructions the leaders provide. The Bible highlights the wrong, but the organization does it anyway, twisting scripture while reinforcing loyalty and allegiance to them.

Nothing supersedes the Watchtower Society and its directives; not friends, not family, not love, and not the Bible.  The organization always comes first.
Posted by trebor at Friday, March 25, 2011

The May 15, 2011, Watchtower emphasizes who Jehovah's Witnesses are instructed to follow. While the section under discussion falls within the article entitled, "Following Christ, the Perfect Leader", make no mistake about it; the Watchtower Society is once again brow beating submission and obedience of its leaders.

Note the bottom of the first column continuing over to the second on page 27: 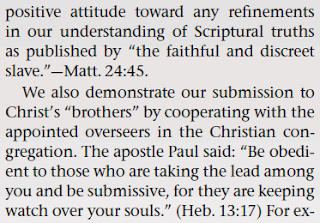 ""The path of the righteous one is like the bright light that is getting lighter and lighter until the day is firmly established," states Proverbs 4:18. Yes, Jesus' leadership is progressive, not stagnant. Another way to cooperate with Christ's "brothers" is to have a positive attitude toward any refinements in our understanding of Scriptural truths as published by "the faithful and discreet slave."--Matt. 24:45

We also demonstrate our submission to Christ's "brothers" by cooperating with the appointed overseers in the Christian congregation. The apostle Paul said: "Be obedient to those who are taking the lead among you and be submissive, for they are keeping watch over your souls." (Heb. 13:17)"


The Watchtower Society in the above quoted section, helps to exemplify how one can cherry pick certain verses from the bible and place their own spin or interpretation for it to mean something more than what the context provides.

For decades now, the Watchtower Bible Tract Society has loved utilizing Proverbs 4:18 to help justify and explain away their false prophesies and flip-flops in doctrine. When an individual reads Proverbs chapter 4 in its entirety, it is plain to see it refers to a father giving advice to his son respecting life. There is no intent or greater fulfillment of a modern day publishing company's justification or explanation of their changing or correcting doctrine. However, the members of Jehovah's Witnesses by far and wide believe it to be so, thanks in part to the indoctrination they receive via the Watchtower.

Nonetheless, the true motive and deliverance of point from the section comes with the final statement of the paragraph; which is to have a positive attitude to whatever the Watchtower says in its publications. They coat it with their typical twist on Matthew 24:45, where the organization interprets Jesus illustration of a faithful and discreet slave, equating to a business derived term of 'governing body', specifically the men who control and manage the beliefs and doctrines of the organization of Jehovah's Witnesses today.

What the organization fails to do and reasonably explain is how that one verse and one part of one of Jesus' illustrations and parables has a modern day fulfillment, while others do not. Who decides which ones and which parts have a modern day or 'greater' fulfillment, and which ones are just illustrations or parables with no additional meaning outside of a lesson being taught or a teaching point emphasized? The fact of the matter is that many of the Watchtower Society’s teachings and beliefs are based upon picking and choosing selective verses and deciding what, if any, modern day application they want to make of it.

Hysterically enough, it was just a few months ago in the September 15, 2010, Watchtower within the article "Your Leader Is One, The Christ", where the Society makes the fictitious claim that: "Jehovah's Witnesses recognize no human as their leader".

However, in the next paragraph from the May 15, 2011 article, a person demonstrates their submission by cooperating with those who oversee and lead Kingdom Halls of Jehovah's Witnesses, which Jehovah's Witnesses believe to be the "Christian congregation", followed up with quoting Hebrews 13:17 which mentions those who take the lead.

So let's summarize the spiritual truths and wholesome spiritual food Jehovah's Witnesses are being served here:

1. The Bible justifies and explains the Watchtower's flip-flops in doctrine, false teachings, including some at times, complete changes and understanding of belief for Jehovah's Witnesses.

2. The 'changes' by the Watchtower Society are just like Jesus' leadership, "progressive" [The Watchtower is never wrong or lied]. Further, if there were no 'changes' we would all be stagnant and not like Jesus.

3. Following Jesus includes not only following and obeying any direction given by the Watchtower Society and its leaders, but being positive about it as well.

4. One should be obedient, submissive, and cooperative to the organization.

The above are main points and intents of the article. Throwing Jesus around and into the mix is done to reinforce their alleged authority and right the organization has to practice and teach whatever it decides to the members. The Watchtower Society is enforcing both its power and control over the members, and quite frankly, it works. Cults work. Really effective cults build a perfect leader in the mind of its members.

What the leaders of Jehovah's Witnesses teach, mostly through the Watchtower, becomes fact and unquestionable in the minds of the members; regardless of change and understanding. Such teachings and beliefs as: organ transplants, specific resurrections, superior authorities, rape, blood fractions/transfusions, voting, separating "sheep" and "goats", and the ever popular and ever changing, "this generation", along with others, have underwent changes, some being a complete 180 degree change in belief, which the majority of the members accept.

That is reason alone for why family and friends can carry out such inhumane directives as shunning as well as isolating associations and ties from the rest of humankind, while fortifying the bounds amongst themselves. It has taking place throughout the history of man and Jehovah's Witnesses are carrying on the tradition…The tradition of following a perfect leader.
Posted by trebor at Tuesday, March 08, 2011