Having an arguably unequivocal history of bashing and outright slandering of other religions and other religious organizations, with an intent of showing how evil and wicked or misleading those organizations are to people, the following articles are no exception:

Some religious organizations are going to new ends to acquire money. The Coronation of the Blessed Virgin Mary Catholic Church in Buffalo, New York, now accepts credit cards, not just cash donations. One finance committee member says: “A church can’t survive on 50-cent [cash] donations.” Credit-card donations are up to $30. Admission is now being charged visitors to London’s thirteenth-century Salisbury Cathedral. A London Observer article calls this “a last-ditch attempt to find a way of meeting the desperate need for funds.””

The phrase “pray now, pay later” appeared in a headline of the Philadelphia “Inquirer” in reporting on a church experiment due to go into effect shortly. A group of ten U.S. religions, including some major Lutheran, Episcopal, Methodist and Baptist denominations, have decided to try church collections by credit card. The experiment, sponsored by the National Council of Churches, will encourage participating church members to authorize credit-card transfers of a specified contribution to their church each month. The idea, a Council spokesman says, is that “this will provide the local church with regular income whether or not the local congregation is in attendance,” especially in “off-seasons,” like summer vacation time. The report on the experiment says that those joining the program will be “giving unto business what belongs to business—a profit.” How so? “Participating banks will charge 65 cents a transaction, and the credit card companies will take off 3 percent of every donation.” Obviously someone benefits, but how much spiritual benefit is the modern churchgoer getting?

“A growing number of Canadian churches” are adopting “modern banking practices, introducing bank cards and credit cards as convenient ways for parishioners to make collection-plate donations,” says the Vancouver Sun newspaper. Debit machines have been placed in church halls along with “donation envelopes with options for automatic account withdrawal and credit card payment.” Individuals simply swipe their card, key in the amount they wish to donate, and then put a copy of the receipt in the collection plate. As one pastor stated: “A cashless society is where society is going. Why not the church?” A church treasurer joked: “You get air-miles on your card, plus you go to heaven for donations. Just think of it as double reward points.”


Some may see the Watchtower Society being completely in the right and justified in pointing out what can be perceived as the obvious. Money comes first for those religious organizations that install debit/credit machines. The financial well-being of the members is not important, just as long as that religious organization obtains funding the most important goal is being met.

What we really have is not only the bashing and the passive aggressive style of the Watchtower Society shining through once again, but the reaching of all-new levels of hypocrisy.

The following letter dated August 25, 2011 has been sent and read to all congregations of Jehovah's Witnesses in the United States: 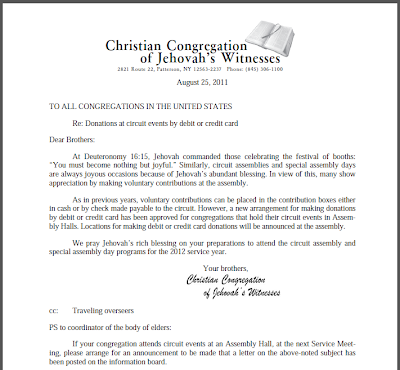 "TO ALL CONGREGATIONS IN THE UNITED STATES


Re: Donations at circuit events by debit or credit card

At Deuteronomy 16:15, Jehovah commanded those celebrating the festival of booths: “You must become nothing but joyful.” Similarly, circuit assemblies and special assembly days are always joyous occasions because of Jehovah’s abundant blessing. In view of this, many show appreciation by making voluntary contributions at the assembly.

As in previous years, voluntary contributions can be placed in the contribution boxes either in cash or by check made payable to the circuit. However, a new arrangement for making donations by debit or credit card has been approved for congregations that hold their circuit events in Assembly Halls. Locations for making debit or credit card donations will be announced at the assembly.

We pray Jehovah’s rich blessing on your preparations to attend the circuit assembly and special assembly day programs for the 2012 service year.


Unsurprisingly, the Watchtower Society has hypocritically went forth to have machines installed to process credit/debit cards of members.  The organization is trying to ensure it receives donations, regardless of the consequences to publishers who will be ‘inclined’ to donate despite their financial circumstances.

In fairness, let's view possible supporting ideas of the arrangement:

-Don’t have cash on hand to drop in the ‘voluntary’ contribution boxes? No problem. Just swipe your credit card! Jehovah will be pleased. It shows your loyalty and devotion to him and his organization. Your sacrifice, support and ultimate praise to Jehovah will be rewarded!

-Has that emotional…”encouraging” talk at the assembly stirred you to action and you don’t have money on hand to drop towards ‘Jehovah’s’ organization? Just swipe that card!

-Contribute with credit now! The end is just around the corner…Don’t worry about the bills or years of debt…This system will be long gone soon but you will have stored up 'treasure in heaven'.

-Can you not afford to donate by credit card to the Worldwide Work at this time of the end?

-Satan’s system would have you believe you cannot afford to donate by credit card. Don’t let that discourage you!  Donate and run the race for life with endurance to the end.

Knowing how the Watchtower Society twist scripture to fit their purposes at times, they could even try something like this…

All true Christians should be able to rightly claim “we have no credit to ourselves.” – 1 Corinthians 8:8.

Bash other religions, call them evil, of Satan’s system or whatever else, but as soon as the Watchtower Society implements or practices the same, Jehovah’s Witnesses are a blessed people with a loving arrangement.

Truth is Jehovah’s Witnesses are a victimized, brain-washed people, inside a hypocritical organization. The organization will continue to show its true colors with the passing of time. The book and magazine publishing company at its foundation has moved to real estate for money and outright, unapologetic taking of funds. It’s hungering to survive and trying to hold back the curtain.

However, the members need to look behind the curtain and see what is really going on around them. What the Watchtower blatantly stated of other religious organizations can easily and evidently be applied to them:

“…a last-ditch attempt to find a way of meeting the desperate need for funds.”

“…giving unto business what belongs to business—a profit.”

“Obviously someone benefits, but how much spiritual benefit is the modern [kingdom hall] goer getting?”

“You get air-miles on your card, plus you [survive Armageddon] for donations. Just think of it as double reward points.”

Hypocrisy, money and greed...Welcome to the Watchtower Society, the organization behind, running and controlling, Jehovah’s Witnesses.
Posted by trebor at Wednesday, September 14, 2011