"The anointed and their other sheep companions recognize that by following the lead of the modern-day Governing Body, they are in fact following their Leader, Christ." 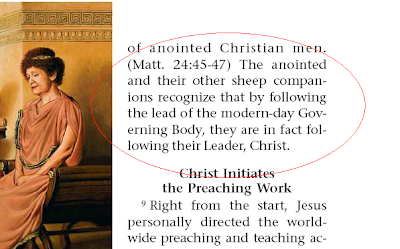 That's what they call a CULT LEADER. It was only a matter of time for the Watchtower Society to come out and make such a statement. The time has come. In the Jehovah's Witness mind what is being indoctrinated is following the men in Brooklyn equals following Jesus Christ.

Matthew 24: 24, 25: "For false Christs and false prophets will arise and will give great signs and wonders so as to mislead, if possible, even the chosen ones. Look! I have forewarned YOU" - [New World Translation]
Posted by trebor at Thursday, June 24, 2010

The one-sided argument is continuously presented to Jehovah's Witnesses due to the Watchtower Society. Only the reasons and ideas supporting the religion are allowed to be viewed by its members. Members are highly discouraged, and trained to think God wants them to avoid critical information regarding anything associated with the organization.

This is a variant of the logical and argument fallacy known as Special Pleading. This illogical and false reasoning is taught and ingrained into the mind of Jehovah's Witnesses as a result of the indoctrination received through discourses and literature of the Watchtower Society.

Let's take note of some examples:

Watchtower, June 1, 1967, page 338:
"In Jehovah's organization it is not necessary to spend a lot of time and energy in research, for there are brothers in the organization who are assigned to that very thing?"


Watchtower, November 1, 1987, page 20:
"False religious propaganda from any source should be avoided like poison! Really, since our Lord has used "the faithful and discreet slave" to convey to us "sayings of everlasting life," why should we ever want to look anywhere else?"


Watchtower, February 15, 2004, page 28:
"It would be a mistake to think that you need to listen to apostates or to read their writings to refute their arguments. Their twisted, poisonous reasoning can cause spiritual harm and can contaminate your faith like rapidly spreading gangrene."


Our Kingdom Ministry, Question Box, September 2007:
"Throughout the earth, Jehovah’s people are receiving ample spiritual instruction and encouragement at congregation meetings, assemblies, and conventions, as well as through the publications of Jehovah’s organization. Under the guidance of his holy spirit and on the basis of his Word of truth, Jehovah provides what is needed so that all of God’s people may be “fitly united in the same mind and in the same line of thought” and remain “stabilized in the faith.” (1 Cor. 1:10; Col. 2:6, 7) Surely we are grateful for Jehovah’s spiritual provisions in these last days. Thus, “the faithful and discreet slave” does not endorse any literature, meetings, or Web sites that are not produced or organized under its oversight.—Matt. 24:45-47.”


Imagine this logic and way of thinking being applied in other aspects of life.

How about if you are a parent and your child wants to join a club called 'Club Wholesome'. However, your child is instructed not to listen to anything negative about the club and to especially avoid anyone who is a former member and has left 'Club Wholesome'. What if the current members of that club spoke disparagingly of its former members and stated everything negative spoken or written about the club is just a pack of lies. Additionally, 'Club Wholesome' has provided to your child a ton of information showing how wonderful the club is and outlined a beautiful plan for its members. What would you do as a parent?

If you apply the Jehovah's Witnesses instruction and indoctrination these are likely outcomes:

-As a parent, you allow your child to join 'Club Wholesome' as all the things you have heard from its members and its literature sounds and appears to be wonderful. You have avoided hearing or reading anything negative or critical about the club. You believe its all lies anyway, despite not listening or reading any of it.

-Being a consumer, you would happily and whole-heartedly support 'The Best' manufacturer avoiding any other products from any other manufacturer. After all 'The Best' is 'the best'; and you 'know' everything else manufactured is defective and corrupt in some way. You believe 'The Best' makes and provides all you need.

Does the above read as sensible? Does the above sound rationale or reasonable? Is any of the above a wise course to take or even an educated and informed decision to make in any area of life?

Sadly, this kind of logic and thinking is all too prevalent among Jehovah's Witnesses. And as the aforementioned Watchtower Society publications prove, this type of viewpoint and attitude is fed as truth and being of God's directive through the organization.

If you happen to encounter or try to reason with a Jehovah's Witness, remember it is highly likely you are trying to reach someone who is set in their way from being indoctrinated to believe and listen to one-side of the argument, and one-side of the argument only... The one they have been trained to believe is 'the truth'.
Posted by trebor at Wednesday, June 16, 2010

It never ceases to amaze, the double talk or speaking out of both sides of their mouth you will find so prevalent among the literature, reasoning of doctrine, and information when looking into the organization of Jehovah's Witnesses.

"By his own later admission, he had been “shaken in faith regarding many long-accepted doctrines” and had fallen “a ready prey to the logic of infidelity.” But tonight he is attracted by some singing. He enters a dusty, dingy hall. His object? In his own words, “to see if the handful who met there had anything more sensible to offer than the creeds of the great churches.”

The young man sat and listened. Jonas Wendell, a Second Adventist, delivered the sermon. “His Scripture exposition was not entirely clear,” our listener later remarked. But it did something. He had to admit: “It was sufficient, under God, to reestablish my wavering faith in the Divine inspiration of the Bible, and to show that the records of the Apostles and the Prophets are indissolubly linked. What I heard sent me to my Bible to study with more zeal and care than ever before.”

Interestingly, you will note that it was listening to an Adventist sermon which reestablished the faith of the ultimate founder of the organization known today as Jehovah's Witnesses. Do you think such a recommendation should be provided by Jehovah's Witnesses today to (re)establish one's faith in the Bible? Should an individual attend and listen to other religious sermons, such as an Adventist to help a person study the Bible 'with more zeal and care than ever before'?

Obviously, such a notion or thought by a member of the Watchtower Society would be borderline if not direct so-called 'interfaith' and possibly considered 'apostate' by the organization. So what is the logical and non-contradicting reasoning as to why it is seen as acceptable to have walked the path that Charles Taze Russell took, but not by other individual members who are known today as Jehovah's Witnesses?

This goes hand in hand with another point. Does God work through an organization or specific individual persons? Asking a Jehovah's Witnesses today, in harmony with the indoctrination they receive; in no uncertain terms stipulate that being a member and follower of the organization is a requirement by God. That is the only way to receive 'truth'.

Watchtower, January 15, 1997, page 22, paragraphs 21:
“We must serve Jehovah with his spirit-directed organization."


Watchtower, January 15, 2010, pages 28-32, paragraph 15:
"Each of us would do well to ask himself: 'Do I fully recognize the responsibilities that I should shoulder within the Christian congregation? Am I properly supporting Jehovah's way of governing? Am I proud to be a subject of Jehovah's ruling Kingdom? Am I determined to continue telling others about God's Kingdom to the extent that I reasonably can?' As a group, we willingly submit ourselves to the direction given by the Governing Body and cooperate with the appointed elders in the congregations. In such ways, we demonstrate our acceptance of God's way of ruling."


Our Kingdom Ministry, September 2007, page 3, Question Box:
"Does the "faithful and discreet slave" endorse independent groups of Witnesses who meet together to engage in Scriptural research or debate?


Watchtower, August 15, 1981, page 29, paragraph 14:"They say that it is sufficient to read the Bible exclusively, either alone or in small groups at home. But, strangely, through such ‘Bible reading,' they have reverted right back to the apostate doctrines that commentaries by Christendom's clergy were teaching 100 years ago..."

The problem presented compounds itself when, depending on the publication and time you reference Jehovah's Witnesses publications, you will receive different and contradicitng statements on the matter at hand.

For example, the Watchtower magazine from January 15, 1975 on pages 46 & 47, as well as the publication 'You Can Live Forever' on page 193, stress that it was always a group, a close unified group or family not scattered individuals that God was refining. However, if one was to reference the Watchtower from July 15, 1960 on page 435 or the 'Proclaimers' book on page 44, it stipulates that God was refining and working through scattered individuals.

So which one is it, has God always directed truth through individuals, as in the case of Charles Taze Russell and even directing one's faith through other religious organizations, or is it always a group and never with an individual? If for a time God worked with an individual and 'now' only works with an organization, when and why did the change take place? What is the logical explanation and reasoning? What is the stipulation, exact moment or occasion when God stopped working through one man like Charles Taze Russell, who started a movement in which a result of it is the religion of Jehovah's Witnesses; and instead, feeds 'truth' and provides 'truth' only through an organization where one must be a part of?

Does God work only through an organization where the Bible cannot be understood or interpreted by individuals, regardless of the amount of Bible reading they perform, as indicated in the October 1, 1994, Watchtower on page 8, and in the publication 'You Can Live Forever' on page 193?

Is it through an individual, such as Charles Taze Russell, the ability is given to comprehend and interpret scripture? Does God work truly like he did, allegedly though Russell, to restore truth which was lost for centuries? The publication 'Jehovah's Witnesses In The Divine Plan', on page 17, states about Charles Taze Russell:

"He revived the great truths...He was permitted to understand it…The promise of the Lord was fulfilled in him.”

Remember, without Russell there is no religion of Jehovah's Witnesses as it is known today. Additionally, there was no 'Governing Body' as it exists today within the Watchtower Society until the mid-1970's. Shortly after the whole 1975 fiasco it obtained the power and control it wields today. Prior to that, it was the Watchtower Society president who exercised complete control of doctrines, publications and activities of the organization. Nevertheless, asking the question again, does God work through individuals or an organization, one thing is for sure...