Jehovah's Witnesses were taught this past Sunday from the September 15, 2010, Watchtower study article found on pages 21-25, entitled, "Your Leader Is One, The Christ". Right out of the gate, paragraph 1 states:

"CHRISTENDOM’S churches have human leaders, such as the pope of Rome, the patriarchs and metropolitans of the Eastern Orthodox churches, and the heads of other religions. Jehovah’s Witnesses recognize no human as their leader. They are not disciples or followers of any man. This is in line with Jehovah’s prophetic utterance concerning his Son: “Look! As a witness to the national groups I have given him, as a leader and commander to the national groups.” (Isa. 55:4) The international congregation of anointed Christians and their “other sheep” companions want no leader other than the one Jehovah has given them. (John 10:16) They subscribe to Jesus’ statement: “Your Leader is one, the Christ.” —Matt. 23:10."


In typical Watchtower fashion, the organization bashes other religions while trying to convince the reader how different they are in the way they arrange and conduct themselves as a group. The claim that Jehovah's Witnesses recognize no human as their leader is at best a game of semantics, at worst a flat out lie.

Hebrews 13:7 - Remember those who are taking the lead among YOU, who have spoken the word of God to YOU, and as YOU contemplate how [their] conduct turns out imitate [their] faith.


Hebrews 13:17 - Be obedient to those who are taking the lead among YOU and be submissive, for they are keeping watch over YOUR souls as those who will render an account; that they may do this with joy and not with sighing, for this would be damaging to YOU.


Hebrews 13:24 - Give my greetings to all those who are taking the lead among YOU and to all the holy ones. Those in Italy send YOU their greetings.


The Watchtower Society utilizes its own interpretation and implementation of the above writings.

Below is the hierarchy and organizational structure/power found within the religion of Jehovah's Witnesses, starting with its top leaders down to the lowest title:

1. Coordinator of the Body of Elders (Previously called Presiding Overseer)

Note that the highest level a female within the organization can achieve is Baptized Publisher.

The chain of power and authority from least to greatest after that...

...Can only be held by a male. Females do not hold such positions within the organization.

The emphasis and stress of leadership and being obedient to Jehovah's Witnesses human leaders is clear within even current Watchtower articles. For example:

Watchtower, January 15, 2008, page 26, paragraph 6:
"In a symbolic way, Christians with an earthly hope today walk behind the anointed slave class and its Governing Body, following their leadership."


Watchtower, May 15, 2008, page 29:
"The Head, Jesus Christ, supplies the body members with what is needed for good cooperation, coordination, and spiritual nourishment. (Eph. 4:15, 16; Col. 2:19) In such respects, the Governing Body is organized to take the lead as Jehovah directs them by holy spirit."


Watchtower, February 15, 2009, page 28, paragraph 17:
"The members of the Governing Body are experienced, spirit-anointed elders. They in particular can be described as “those who are taking the lead” among us. (Heb. 13:7)"


Watchtower, November 15, 2009, page 14, paragraph 5:
"We need to guard against developing a spirit of independence. By word or action, may we never challenge the channel of communication that Jehovah is using today. (Num. 16:1-3) On the contrary, we should cherish our privilege to cooperate with the slave class. And should we not strive to be obedient and submissive to those taking the lead in our local congregation?"


As for Jesus Christ, the teachings of Jehovah's Witnesses states the majority of the members do not even have Jesus as their mediator:


Straight from the Watchtower Society, Governing Body endorsed, publication studied and taught by Jehovah's Witnesses, "Worldwide Security Under the Prince of Peace". The above teaching came directly from page 10, paragraph 16.

Make no mistake about it, Jehovah's Witnesses have plenty of human leaders. Their publications can try to indoctrinate otherwise and play with semantics, but they are encouraging a game of lies and hypocrisy.
Posted by trebor at Tuesday, November 23, 2010

Sins of the Elders

The new elder's manual, Shepherd the Flock of God, provided by the Watchtower Society, makes a few disturbing statements in just a couple of paragraphs.  Notice what is highlighted on page 38, paragraphs 19 and 20, respecting the past sins of an elder: 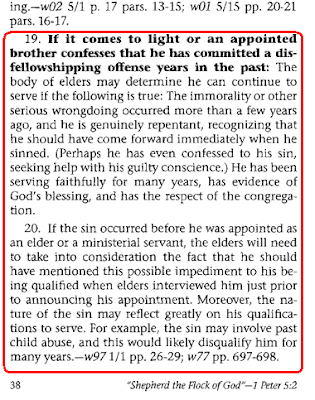 "If it comes to light or an appointed brother confesses that he has committed a disfellowshipping offense years in the past: The body of elders may determine he can continue to serve if the following is true: The immorality or other serious wrongdoing occurred more than a few years ago, and he is genuinely repentant, recognizing that he should have come forward immediately when he sinned. (Perhaps he has even confesses to his sin, seeking help with his guilty conscience.) He has been serving faithfully for many years, has evidence of God's blessing, and has the respect of the congregation."


So if an elder has a serious sin, one worthy of being disfellowshipped and does not mention it, waits some years, and then confesses; the congregation will never be the wiser, as long as the other elder's believe that elder is sincere in his relatively recent display of repentance and regret. It will be like the sin never occurred and the man would remain an elder over Jehovah's Witnesses. He can continue to serve as an elder - No consequences are experienced.

Surely, they must draw a line at something as detestable as child abuse, no? Paragraph 20 informs:

"If the sin occurred before he was appointed as an elder or a ministerial servant, the elders will need to take into consideration the fact that he should have mentioned this possible impediment to his being qualified when elders interviewed him just prior to announcing his appointment. Moreover, the nature of the sin may reflect greatly on his qualifications to serve. For example, the sin may involve past child abuse, and this would likely disqualify him for many years."


According to the organization, and the directives elder's are provided, a gross sin, one worthy of disfellowshipping, only serves as a possible impediment for the man to be appointed. In fact, the Watchtower Society states that even if it involved past child abuse it would only likely disqualify a man.  It may reflect greatly on his qualifications to serve.

In fully understanding the consequence of this 'spiritual direction', let's paint a scenario.

A child abuser has been 'appointed' to an elder and has been one for many years. Finally, he comes forward and states he used to abuse children. The admonition is that he would likely be disqualified but not definitely as an elder; the same applies for any so-called brothers reaching out for ministerial servant or wanting to become an elder. Although abusing children in the past, but stating he has not done so for many years; that individual is not definitely disqualified or will never serve, only likely.

How would you like that individual to remain an elder? What if that elder is going door to door or whatever else with your child, brother, sister, niece, nephew, or any other family member? You'll never know, and there is nothing coming from the hierarchy of the organization stopping it. The so-called ‘appointment’ and keeping that man in such a position was made by a bunch of local men, who believe they are being guided by holy spirit with the nonsense spewed from the Watch Tower Bible Tract Society.

So keep that sin a secret, brothers! Wait several years, and in the meantime do works that prove how repentant you are and build a sterling reputation. Convince the congregation you are a fine character and an asset to the congregation. This will show "evidence" of "God's blessing" and you will likely be absolved of any consequence of that sin...Even past child abuse is possibly permissible...

Sickening to think the organization of Jehovah's Witnesses claims to be the only true religion composed of the only true Christians. It's more like a place where a devious and sneaky man's dream can come true. If you're a male, you just have to play the game.
Posted by trebor at Monday, November 15, 2010

The newly released 'Elder's only' manual 'Shepherding the Flock of God', has been followed up with a letter addressed to the Body of Elders, dated October 7, 2010. It highlights the respective view of women by the organization's leaders.

The letter states regarding having the book spiral bound:

"There is no objection if an elder personally spiral binds or laminates his own textbook or does so for elders. If he has another baptized brother who is not an elder do the work for him, the elder must watch while the work is being done. Outside companies, unbelievers, or sisters are not permitted to do this work. The material in the book is confidential, and confidentiality must be preserved."


So, if a member is a baptized male of the organization, it's permitted for the individual to do the work of spiral binding the book. However, if it is a baptized female she is not allowed to do so. Sisters - inclusive of all women who make up Jehovah's Witnesses - are classified with "outside companies" and "unbelievers" when it comes to trust and confidentiality according to the leaders of the organization.

Jehovah's Witnesses leaders, the good old boys of Bethel, whether it's Brooklyn or Patterson, lay the law once again.

Is it no surprise the organization stated that females who were raped are guilty of fornication if they did not yell or scream out while being attacked? See the Watchtower from January 15, 1964, page 64; and the Awake! from March 8, 1974, page 14.

For added insult to the organization’s “sisters”, the February 22, 1984 Awake! magazine admonishes women to treat their rapist respectfully.

This is not good and wholesome spiritual food that Jehovah’s Witnesses are fed, but sickening, twisted and demoralizing instructions...Especially so, if you are a female and one of the organization's so-called "sisters".
Posted by trebor at Tuesday, November 02, 2010