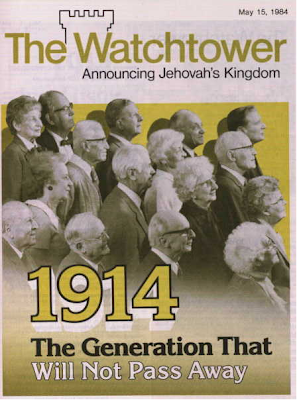 "From a purely human viewpoint, it could appear that these developments could hardly take place before the generation of 1914 disappears from the scene. But fulfillment of all the foretold events affecting the generation of 1914 does not depend on comparatively slow human action. Jehovah's prophetic word through Jesus Christ is: 'This generation [of 1914] will by no means pass away until all things occur.' (Luke 21:32) And Jehovah, who is the source of inspired and unfailing prophecy, will bring about the fulfillment of his Son's words in a relatively short time.--Isaiah 46:9,10; 55:10,11."
--The Watchtower, May 15, 1984, pages 6-7

Note: The expression "[of 1914]" is in the original Watchtower text.

“‘However, the prophet who presumes to speak in my name a word that I have not commanded him to speak or who speaks in the name of other gods, that prophet must die. And in case you should say in your heart: “How shall we know the word that Jehovah has not spoken?” when the prophet speaks in the name of Jehovah and the word does not occur or come true, that is the word that Jehovah did not speak. With presumptuousness the prophet spoke it. You must not get frightened at him.’"
--New World Translation of the Holy Scriptures - Deuteronomy 18:20-22.
Posted by trebor at Thursday, April 22, 2010

Though Franz was well-known among many old timers in the organization to be the author of many of the books printed by the Watchtower Society, little is known about other contributors to doctrinal changes. One of these men is Gene Smalley. He is the author of this 'new light' (As opposed to C.T. Russell's 'old light') on blood transfusions.

There continued to be 'refinements' of this Watchtower Society doctrine as a result of the inaccuracy of research performed by the organization. More so, changes have been implemented due to the legal ramifications in modern times.

Furthermore, many countries have been issued public relations statements that would give the appearance that Jehovah's Witnesses are not prohibited by the organization from having blood transfusions. Nonetheless, if they make the personal 'choice' to have a blood transfusion, they are disfellowshipped and shunned. Of course, this is not mentioned in the information provided to the public.

Here's a list of some Watchtower Society publications and the stance respecting the organization's doctrine and teachings of blood:

Besides the current no blood transfusion stance which started under the Rutherford Reign in the mid-40s, notice the other following oddities...

Apparently, according to Watchtower Society teachings during the mid-70's God had a disdain towards hemophiliacs. Additionally, it took close to 40 years for God to direct his organization back to the stance that blood fractions are allowed. After teaching it was not allowed in 1954, approximately four years later it was permitted. About three years after that, it became prohibited again, and remained that way from 1961 until 2000. In 2000, God threw some more 'new light' at the Governing Body who gave the thumbs up to blood fractions.

To ponder the number of deaths the above doctrines has caused and still causes are staggering. Not to just adults but to innocent and helpless children. Here's a brief list to consider straight from some of the Watchtower Society's publications:

Please note…The May 22, 1994 Awake! is a good reference point alone as numerous children are spoken of who have died due to the Watchtower Society's interpretation of Bible verses.

-Brendon Hood - age 4 - Source: Associated Press dispatch reproduced on page 70 of the book ‘Danger at Your Door’ by Duane Magnani.


There are hundreds to thousands more which could be referenced, but we will leave that for your own personal research. A child of 15, 12, 2 years old age...What 'choice' did these children have?

Indoctrination from an organization claiming to be God's channel of truth provides the directive and they follow or are forced to follow in many cases, their parent's consent or/and legal directive. The blood guilt is clear and is extremely saddening. It is an evil from a false prophet doomsday organization whose victims include helpless innocent children that is reminiscent of the child sacrifices found in the Bible. Molech and Baal would be pleased.
Posted by trebor at Tuesday, April 20, 2010

Submit To The Governing Body

This past April 4th Sunday's Watchtower Study article emphasized once again to the followers what is key to the faith and organization that is known as Jehovah's Witnesses. As the Watchtower Society has stressed, is stressing, and will continue to stress, is obedience to their organization.

"Each of us would do well to ask himself: 'Do I fully recognize the responsibilities that I should shoulder within the Christian congregation? Am I properly supporting Jehovah's way of governing? Am I proud to be a subject of Jehovah's ruling Kingdom? Am I determined to continue telling others about God's Kingdom to the extent that I reasonably can?' As a group, we willingly submit ourselves to the direction given by the Governing Body and cooperate with the appointed elders in the congregations. In such ways, we demonstrate our acceptance of God's way of ruling. (Read Hebrews 13:17.) Willing submission results in a worldwide unity that is unique in this divided world. It also produces peace and righteousness and brings glory to Jehovah, demonstrating that his way of ruling is by far the best."

This obedience to the Governing Body is backed with a fallacy consistently used by the Watchtower Society known as the 'Appeal to Authority'. The phrases: 'Jehovah's way of governing', 'Jehovah's ruling Kingdom', 'God's Kingdom', and the aforementioned 'God's way of ruling', all surrounds the Watchtower Society's direction to submit yourself to their Governing Body’s directions.